Legal Consequences of Rioting in California 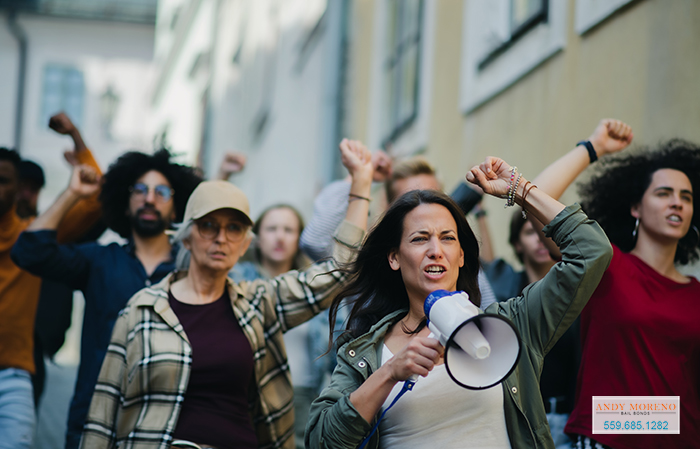 These days it seems like rioting is on everyone’s minds. Every single day it seems like someone has questions about why riots start, when a protest crosses the line and becomes a riot, how riots should be handled, and what the legal consequences of rioting are in California.
What is a Riot

It can sometimes be difficult to distinguish the difference between a rowdy protest and a full-on riot. According to the Merriam-Webster Dictionary, a riot is:

“a: a violent public disorder specifically: a tumultuous disturbance of the public peace by three or more persons assembled together and acting with a common intent
b: public violence, tumult, or disorder”

In most cases, protests are designed to be peaceful. The problem is that it only takes a handful of people to turn a peaceful protest into a full-scale riot. The problem is that some people see the protest as a means of breaking the law. They attend the protest and use it as an opportunity to break into a business and loot the place. This creates panic and chaos. In the blink of an eye, what was just an orderly protest is out of control and all sorts of problems ensue.

The other reason so many protests devolve into riots is that the sheer number of people involved in the protest gives some a sense of anonymity. They feel safe enough to escalate their behavior and do things, such as swearing at cops and making threats, that they’d never do if they were on their own.

Rioting in California is covered by the state’s civil disobedience laws. Destruction of property charges is often included in the charges.

The topic of rioting is covered in California’s Penal Code 404.6 PC. According to this law, you can be charged if you do things like:

✦ Participate in a riot
✦ Burn, destroy, or steal property during a riot
✦ Knowingly commit acts of either force of violence during a riot

Consequences of Rioting in California

California’s lawmakers want everyone to carefully consider the consequences before they do anything that could be considered inciting or participating in a riot. They want you to realize that as soon as things start getting out of hand, you should remove yourself from the situation.
The penalties linked to rioting in California include:

In many cases, a civil disturbance charge that includes rioting represents just a small portion of your legal headaches. Depending on your behavior during the riot you could also be charged with assault, breaking and entering, and property destruction.

If you damaged property or hurt someone during the riot, you could also face civil lawsuits.

When all is said and done, it’s in your best interest to put as much distance between yourself and a potential riot as possible.